If you have not seen the Geico Commercial about the free range chicken going on an adventure, here ya go.

It’s pretty cute and worth the 30 seconds, especially because this post addresses it.

Let me preface the post with this: while I am a strong advocate for commercial agriculture, I also believe in consumer choice. But I believe the choice should be made after educated research, which means the consumer should research both sides of the argument, not just one. 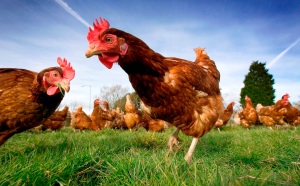 A lot of consumers like to think that free range means that the chickens have the unlimited access to do what our chicken friend in the commercial did. Travel as they wish, on a whim, to anywhere. But that is not quite the case.

The USDA says, FREE RANGE or FREE ROAMING: “Producers must demonstrate to the Agency that the poultry has been allowed access to the outside.” The animal does not have to live its entire life outdoors, it just has to have the access to it at some point and time, whether it utilizes it or not.

A study in the United Kingdom found that out of a flock of 800,000 birds only 15% were observed outside during the daylight hours. This is because the open pasture makes them nervous since it provides no protection from sun, wind, or predators.

The issue is that less than 1% of chickens are raised as free range, and in the future it will be almost impossible to raise enough chickens to feed the growing world population.

Poultry is the second most consumed meat in the world, not too far behind pork. Poultry is usually the cheapest meat for all the different countries. If all of agriculture switched over to free range chickens it would raise the price of chicken so exponentially, that very few people in developing countries would be able to afford it.

Conventionally raised chicken is often described in a negative way, but it is described that way mostly by people who have never been to a poultry farm. While I will admit that all areas of agriculture, have something they could improve on (because no one or nothing is perfect) I also believe that conventionally raised poultry at the majority of U.S. farms are treated humanely. I believe that because I have seen it with my own eyes.

In conventional laying houses most chickens live in cages that provide them with room to move around and spread their wings. An interesting fact about chickens is they will not produce eggs if they are stressed out! That means the chickens are comfortable and not stressed in these cages, or they wouldn’t produce any eggs.

If you want your chickens to be free range, that is perfectly fine because it is still a part of agriculture. But I want consumers to know the truth about what “Free Range” means for the chicken and for labeling purposes.