The term “factory farm” is being used more and more in our world, and the connotation just gets worse and worse. Many companies would like consumers to picture their competition’s food raised in cold, lightless buildings, being abused and neglected by the “big ag” companies. 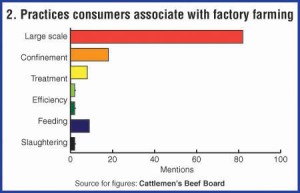 ude the size of the farm as a deciding factor in whether a farm is considered a “factory farm.” Here is one definition, “characterized by a dense population of animals raised on limited land and requiring large amounts of food, water and medical inputs”

But instead of size, the USDA classifies farms by the amount of products sold per year. So the main practice associated with “factory farming” is not even a description used by the USDA, there is no top limit on amount of sales for a family farm; they can make millions in profit and still be considered a family farm as long as they fit these requirements.

This website states that “factory farms dominate U.S. food production,” but that is not the truth. According to the US Department of Agriculture, USDA, 97.6% of farms are family farms, and they account for 85% of production.

This website also states that the animals undergo “debilitating and painful conditions and deformities.” From personal experience I know anything that is broken is more difficult to sell, this includes animals. If we look at this from a purely economical standpoint farmers want to care for their animals because then they can make a larger profit.

But farmers also genuinely care for their animals, they spend countless hours checking cows that are about to calf, or treating a sick animal. Whoever said farmers don’t care for their animals, has probably never met a true farmer. I was recently working bulls with some of the biggest names in the cattle industry in Alabama, and before lunch these men gathered together and prayed, not only for our food, but also for the bulls we had just worked: for their safety, health, and growth.

Another characteristic people associate with “factory farming” is confinement in a barn; some people assume these walls are made to hide the torture we have planned for the animal, but what they do not realize is that these barns actually protect animals.

I live in Alabama, where 100 on a summer day in the middle of July is nothing new. I know people that farm in South Dakota where a few feet of snow can be constantly on the ground in the winter. Our barns provide protection from these extremes, no the animals may not be out grazing the pastures 24/7 but at least they aren’t freezing to death or dying of heat stroke. (this mostly pertains to smaller livestock, not cattle)

This blog does a great job of explaining why these Minnesota farmers house their hogs in a barn.

The main practices that consumers associate with “factory farming” and “big ag” are just large scale family farms that are run humanely by a family that is trying to make a living just like you or me. I once had a lady tell me that someone was not a “real farmer” because he ran a large operation, I do not think that the number of livestock or acres you have should determine if you are a real farmer. I believe the way you raise and treat your animals should determine if you are a true farmer.

The use of hormones and antibiotics in the beef we eat is being questioned individually and on a large scale. An example of this is Steve Ells, Chipotle’s founder, chairman, and co-CEO, who stated the chain was going to import beef from over 8,000 miles away in Australia, because the supply of antibiotic and hormone free beef has dwindled recently. That is his opinion, and he is entitled to it, but I just wanted to help spread awareness about how antibiotics and hormones are used in the beef industry.

Top antibiotics in humans vs. animals

People that do not take/finish their antibiotic prescriptions from the doctor are more likely to contribute to the formation of “superbugs” than farmers who administer antibiotics to their sick cattle to prevent a loss.

Now for the next thing Steve Ells said that US beef couldn’t provide, hormone free beef. The US can’t provide it because it is impossible, all living things have hormones so there is no such thing as “hormone free” beef. But we’ll just assume he meant no added hormones. It is true, some farms use added hormones to aid in raising their cattle, this is perfectly legal unlike in the poultry and pork industries. Hormones in cattle are administered through an implant under the skin on the back of the ear and are released slowly over time. Since the ear is one of the few parts of the beef carcass that we discard the implant never enters the food industry.

A woman would have to eat 3,000 lbs of beef a day to equal the same amount of estrogen in 1 birth control pill. @Bovidiva #AUBCC14

While Steve Ells and Chipotle choose to source beef from over 8,000 miles away, I am perfectly satisfied with my American raised beef, because I know the truth about antibiotics and hormones in beef.