The FDA has strict rules about antibiotic residues, because of this milk is tested multiple times. At the farm and on the truck. If there are even trace amounts of antibiotics found on one tractor-trailer of milk, the entire truckload will be discarded. If this happens the farm has to pay upwards of $10,000 for the discarded milk. There is also a time period where the milk at the farm will not be picked up until the FDA has inspected the farm and ran tests.

So antibiotics in milk is detrimental to one farmer’s bank account, but also to their reputation and to other farmers. Most tractor-trailers transport milk from multiple farms, so it’s not just one person’s livelihood being thrown away, it’s multiple. This is incentive for farmers to test their own milk at the farm and follow protocol to prevent antibiotic residues. 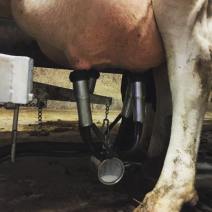 There are also protocols on individual dairy farms that prevent antibiotics from getting in our milk supply. Detailed records must be kept so that all employees know which cows are receiving antibiotics. Those cows are then milked into a separate tank, sometimes called a dump tank, for a specific period of time. That time frame is called the withdrawal period, or how long it takes medicine to leave an animal’s system.

All farmers follow the posted withdrawal period to make sure that the antibiotic is completely out of their system before they put the milk in the regular tank. Some farmers even wait a few more days just to be safe and then run a test to check for antibiotic residues. Dairy farmers drink the milk the produce, just like you do, so they want it to be as safe as possible for their families and yours. 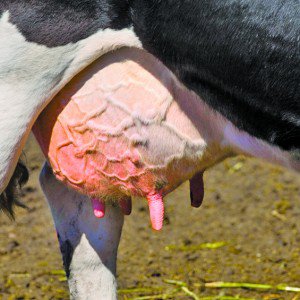 You may be wondering if it is so much work, time and potential money why even use antibiotics. Well because farmers love their cows and want them to be happy and healthy If you or your child is sick what do you do? Usually you go to the doctor and get antibiotics. Why? Because you don’t want to be sick anymore. The same is true for these cows. The dairy farmer would much rather put in the effort to milk into separate tanks and test for antibiotic residue than see their cows in terrible pain from a treatable disease.

One common disease that occurs in dairy cattle is mastitis. Mastitis is an inflammation of the mammary gland in the udder, typically due to bacterial infection. The only way to treat mastitis is through antibiotics. Respiratory diseases are also common and can be fatal if left untreated.

You don’t have to worry about antibiotics being in the milk we buy from the grocery store, the FDA and dairy farmers make sure that’s not a problem.

Four generations, two percent and fifty-eight. These are all numbers that apply to the agriculture industry. How so?

Four Generations: Most people are four generations removed from the family farm. This means they are not involved in the day to day operations of raising or growing food.

Two percent: Only two percent of Americans are farmers. This means that 98% use a farmer every day, but they probably do not know one. This combined with the average person being four generations removed from the farm raises issues where people could have unanswered questions about their food. But they don’t know how to get their questions answered because they do not know a farmer.

Fifty-eight: This is the average age of most farmers in the United States. While that is not old by any means, they are not the people most commonly sharing what they’re doing on social media.
These numbers are just a few of the reasons we should advocate for agriculture. Now what is advocating for agriculture? Well it might be easier to explain what it is not.

It is not bashing organic, conventional or even vegetarianism. It is not telling people they are stupid because they do not understand or agree with you. It is not just blindly sharing articles and statuses without reading or responding. It is not you marketing your farm, ranch or brand.

Being open with your friends and followers about what is happening on your farm. Being willing and ready to answer questions about hot topic
issues (like subway’s antibiotic free statement). Being aware of what is being said about the industry and explaining why you do what you do. 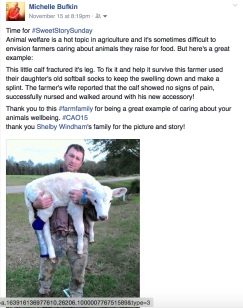 How to Advocate for Agriculture:

A picture is worth a thousand words. Pictures better illustrate the truth of what is happening on your farm. A picture inside your hog barn, showing the cleanliness. A video of you moving cattle to show that it’s done humanely. Share a status about why antibiotics are used on your farm. Allow people to get involved in your everyday practices. I’ve seen farms ask people to name calves through social media, people love that because they feel important and valued in the process. Invite people to your farm, be willing to be transparent and honest.

“If you care about ag being accurately represented, know that we need every voice in the conversation.”

The most important part of advocating is like Nike says, to just do it. There are lots of anti-agriculture groups out there that are bashing agriculture. We need to start standing up for ourselves.

The next most important part of advocating is to not bash other farmers or non-farmers, we have plenty of others doing that for us. People are curious about where their food is coming from, be willing to intelligently, honestly and transparently answer their questions. Join the conversation and share the truth about the agriculture industry.

Not sure what to think about the Cattle Industry Convention & NCBA Trade Show? Well here are just a few of the important things you should know about one of the largest events in the beef industry! 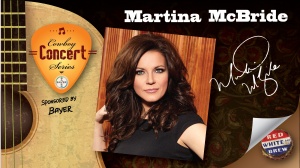 The trade show and majority of meetings will be held at the San Diego Convention center located downtown San Diego, California. The convention will take place from January 27-29, 2016.

The convention attracts 7,000 – 8,000 producers from around the country annually. 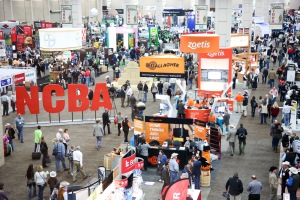 The Trade Show has 350 companies that will have exhibits set up on 250,0000 square feet. For those of us who think better in acres, that is over 6 acres of companies there for you! There is a learning lounge, which is an education area on the show floor. Also a Demo Arena will be set up featuring Stockmanship and Stewardship sessions daily.

Alright now that you are super excited to attend this amazing convention to learn more about this industry that we so love, you’re wondering how to get there. Well I’ve got you covered! You need to register at www.beefusa.org before January 4th (for the early registration price), but you can also register onsite. So what does your registration include? Access to all general sessions, entrance to trade show, access to all meetings, a ticket to Best of Beef Breakfast, a ticket to Cowboy Concert Series (with Martina McBride!) and Red, White & Brew after-party, and a ticket to the USO show aboard the USS Midway. If you are interested in attending this convention feel free to contact me for a promotional code that will provide you with an awesome surprise!